Every now and again we’d like to virtually introduce you to one of our ‘spirited people’. Today it’s our pleasure to present our motion graphics guru, Jonny Stopford who has worked with Spirit as a designer, director, animator and editor in the field of broadcast design and motion graphics since 1998. 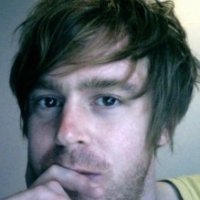 Jonny has created idents, branding sequences, titles and effects for, amongst others: the BBC, ITV, Channel 4, London Olympics 2012, Sky Movies, BT Vision, FIFA, The Guardian, Virgin Atlantic, Bloomberg, etc. He has won a Bafta, a Peabody and an IVCA Gold for his work on the BBC News rebrand and Channel 4’s documentary project ‘Four Docs’. Jonny also works in the field of live band visuals and recently he’s been working on Primal Scream’s “Screamadelica” tour and The Chemical Brother’s world tour, as well as their highly acclaimed feature film “Don’t Think”. And just in case that isn’t enough, he’s also a successful DJ playing sets in top night clubs around the world, and he has his own dance music record label. Jonny’s combination of skill sets make him a very rare talent indeed at the highest level in his field, and we are very proud to work with him on your projects.